by Anthony Ritchie, for orchestra, Opus 131

A short lively piece for amateur orchestra. Buoyant in tone and inspired by street processions. 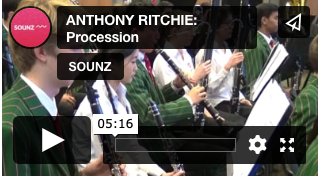 Procession was commissioned by The Manukau City Symphony Orchestra, as part of the Composer-in-Residence position held by the composer. It was written for the orchestra's April concert in 2008.

The music was inspired by street processions such as Santa parades, graduations, or protest marches which have played an important part in New Zealanders' lives. It opens quietly as the procession approaches from afar, with a rhythmic idea on the woodwinds which is picked up by strings. The trumpet plays a simple second theme, which is then played in canon. The momentum builds to a climax, and a contrasting flute theme is presented. Themes are developed briefly before a rumbustious coda brings the piece to an end.

The mood is generally buoyant in tone, with strong march rhythms interspersed with some meter changes.

Buy the right to download a pdf containing all orchestral parts, and permission to print them for one orchestra: NZ$30.00