for orchestra, by Anthony Ritchie, Opus 171

This symphony was composed for The Christchurch Symphony Orchestra with financial assistance from The University of Otago. It is in one movement, divided into 14 sections, or 'stations', and is to be performed without a break. It is dedicated to those in Christchurch who have suffered in the earthquakes. The recording of Symphony No.4 'Stations' was selected as one of the recordings of the year by MusicWeb International, 2015. 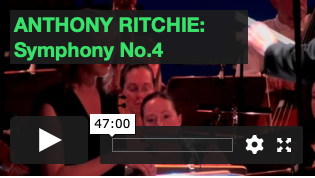 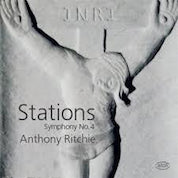 This symphony takes as its point of departure a book called The Way of the Cross, which combines images of sculptures by Llew Summers with poems by Bernadette Hall, both of which centre on the Christchurch Cathedral of the Blessed Sacrament, in New Zealand. Llew Summers' sequence of 14 sculptures entitled The Stations of the Cross were created for the Cathedral in Christchurch in 2000, and outline the final events in the life of Jesus Christ. They caused controversy at the time, with their challenging re-interpretation of the traditional Christian images. Bernadette Hall's 14 poems followed some years later, and were informed by the sculptures. The poems and images of the sculptures were both published in the book The Way of the Cross in 2005. In 2011, the Catholic Cathedral was ruined in the second of the major earthquakes that shook Christchurch, and has since been demolished.

As a response to these events, this symphony includes several musical settings of Hall's poems in a one-movement structure divided into 14 sections, or 'stations'. Not all the poems are set, however: some 'stations' are purely instrumental, forming musical meditations on the texts as well as suggesting other images and moods related to the earthquakes. The trials and suffering of Jesus Christ as depicted in the poems/sculptures become associated with the trials and suffering of a city. There are also personal associations in the music, deriving from the composer's own experiences in the Cathedral, both as a composer and as a member of the Cathedral choir in the late 1970s. Consequently, two quotations feature prominently: first from Palestrina's Missa Papae Marcelli (in Station 5) and second, from Bach's St John Passion (in Station 12). Therefore, elements of mythology and life experiences are brought together in this work.

There is considerable cross-referencing of musical ideas between 'stations', and some re-cycling of material towards the end, as a sort of summary of themes. For example, the main themes from Station No.4 return and are extended in station No.13, and the quotation from Palestrina (transformed) also reappears at the climax of the work, at the start of Station No. 14. Below is a summary of the 'stations', with their subtitles taken from Hall's poems as well as biblical references:

With thanks to Bernadette Hall, Llew Summers, the Cathedral of the Blessed Sacrament, and Gretchen La Roche

Texts sung by solo soprano in the symphony

Poems by Bernadette Hall, from The Way of the Cross.
Bracketed text is omitted. Some stations include only one line of text, and others are orchestral only.

First Station
I am very small, you are very big. I am lost here.
You have a lot to lose. You lift me on your mocking,
stabbing, [querulous] finger. You are sick and tired

of all the drama, the fuss. Life after all is too short
for this sort of nonsense. Before you I am a small boy,
my head full of dreams as is the way with small boys

who walk sometimes into lamp-posts distracted
by their dreams. The thing that stirs in me is bigger
than my fear. You want to stub it out. It is too simple,

too weird for you. I am the next country you must invade,
bringing down the walls and the roof, scattering the flock.
Your boots are planted. My feet are bare.

Yet you fear me. I am a small animal backed into a cave.
You will have me hounded with sticks and whips and wood.
[My fine pelt slung on a crossbeam.]

Second Station - "My Terrors"
(Orchestra only: sub-title from Lamentations 2:22)

I am a man staggering under a sack of grain that will be poured out
On the ground and wasted.

I am running into trouble, running out of time, the wood pressing
Down on my neck.

My body is being shaped by the wood, blood bursting in my ears,
My ragged breathing.

to piggyback them safe across a swollen river. I am being swept
off my feet.

Like a swimmer pulled down under the water, I fling up my hand.
I am drowning alone.

Fourth Station - "She weepeth sore in the night and her tears are on her cheeks."
(Orchestra only: sub-title from Lamentations 1:2)

Fifth Station - "The young men have ceased from their musick"
(Orchestra only, with vocalizing: sub-title from Lamentations 5:14)

Sixth Station - "Wide eyed, I have looked into the abyss"
(Orchestra only: sub-title from the first line of the poem)

Seventh Station
My back curves like a whale breaching.

I lift my right foot. I am walking, still capable
of walking upright [or nearly]. I am folding
down like a landslip, like a collapsing building.

I have grown big in their minds, too big.

Like a tree I am shading them, bleaching out
their dreams. They have no idea what to do
with me. They cannot imagine any alternative.

I am a strong man, being cut down like a kauri.

Eighth Station - "The women are like a halo around me"
(Orchestra only: sub-title from the first line of the poem)

Ninth Station
The wood is a hammer
that drives me into the ground.
I am brought to my knees

like a broken animal.
[For a moment I can rest
propped up on my arm

Like a banqueter.]
But the food is bitter,
my mouth dry, my tongue swollen.

[What is to be given birth to here?]

Tenth Station
Now I am as when I entered this world.

They try to shame me but they are the ones
who are shamed. I am become as a child
to them, or rather, a criminal, a slave.
They look on my innocence with hard eyes.
They mock my simplicity.

My arms are open. I shall not close them again.
[My garment is a sail, my right hand an oar,
my body the boat that will take me to a holy place.]

Twelfth Station - "Why have you abandoned me?"
(Orchestra and soprano singing one line from the poem)

Thirteenth Station
For one split second everything
holds its breath. The heavens
darken, clouds are torn asunder,

no-body smiles.
It is the end, as they say,
of a very unfortunate episode.

Then the world resumes its busyness.

His friends arrive. They weep,
they are distressed as a woman in childbirth
is distressed. They climb the ladder.

A hardcopy study score is available from Promethean Editions. Conductors and orchestra managers should get in touch with us directly this month to receive a free digital perusal score. Email: bellbirdpublications at gmail.com

Buy the right to download a single pdf containing all parts, online, and permission to duplicate or print it as required for one orchestra : NZ$100.00 (currently about US$63).